Living in the city you’re bound to get rats…especially if you like to feed birds.  Recently I’ve noticed a rat hanging around and knew I had to do something about it.

Now, I actually really, really like rats as an animal.  They are extremely intelligent and are actually really good pets for people who can’t have dogs – whether or allergy reasons or space reasons.  They have a lot of personality and recognize their owners and will learn their owner’s mannerisms and schedules.  They are basically like little dogs with long ass creepy tails.

I don’t have issues with rats, but wild rats carry diseases and can cause all sorts of issues to your property…so I knew I had to do something about this rat.  A couple of years ago I had a rat in the house and I used one of those huge jaw like rat traps.  It was terrible.  I heard the trap go off in the middle of the night and then the rat flopping around for a few minutes before it actually died.  I felt so bad.  That poor rat really suffered. 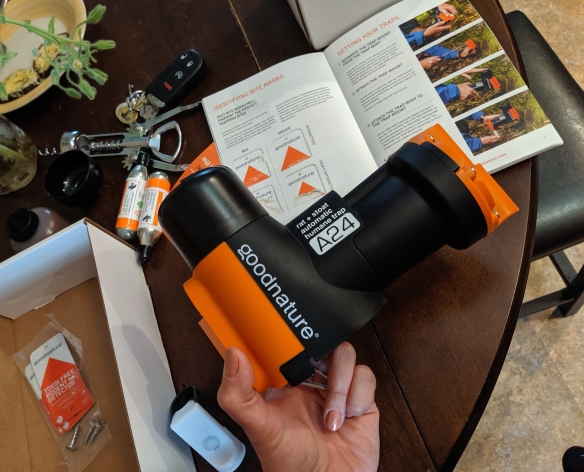 This is the main body of the A24 rodent trap. In the picture you can see two CO2 canisters, the counter, and the rodent detectors.

This time I wanted to do something more humane.  I thought about catch & release, but with catch & release you are just moving a rat into an area that it does not know so they get lost and disoriented – or it becomes someone else’s problem who will then dispose of them in a way you were trying to avoid.  Using poison was out of the question as it takes a while for the rat to actually die and then you have to deal with the stench of a decomposing rat body somewhere on your property…not only that you will have to worry about your dogs or other wildlife scavenging the dead rat full of rat poison.  Maze traps drown them and glue traps make them starve/dehydrate to death.  Then, we’ve got the old school jaw rat traps that I described earlier.  I wanted to try an electric mouse trap but they are for use inside as you can’t get them wet…so that was a no-go for outside pests.

I was looking for a trap that would kill the rat quickly and reset itself, so I didn’t have to do too much messing around with the trap, and I finally found one.  The Goodnature A24 Rat & Mouse Trap (https://www.automatictrap.com/).  This trap is a certified Class A NAWAC humane trap (NAWAC is the National Animal Welfare Advisory Committee that was established in New Zealand after the Animal Welfare Act was passed:  https://www.mpi.govt.nz/protection-and-response/animal-welfare/national-animal-welfare-advisory-committee/).  It is a CO2 powered striker with bio-attractant lure bottle.  Basically, the bio-attractant is installed at the top of a tube with a sensor that is right underneath the attractant. Along the side of the tube is a hammer with a piston.  The rat/mouse crawls up the tube, trips the sensor, and BAM gets knocked out.  The rat doesn’t know what hit it. Then the hammer resets itself.  The hammer can go off 24 times before you have to replace the CO2 canister. 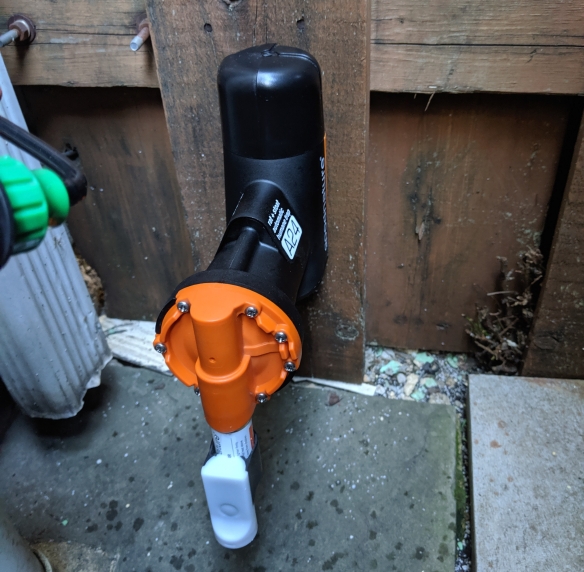 The A24 Trap pictured fully assembled and installed

I bought the trap kit with the counter (https://www.automatictrap.com/collections/shop/products/a24-rat-and-mouse-trap-kit-with-counter-1).  Now, this isn’t exactly the cheapest rat trap out there but it comes with a lot of positives.  As I mentioned before the trap can reset itself up to 24 times, so you really don’t have to fiddle with it that often, depending on your rat population.  The bio-attractant is designed specifically to attract rats and mice and each bottle will last for 6 months – again, set it and forget it.  It doesn’t require any electricity which was a major bonus as I don’t have an electrical outlet in my backyard and it will operate in any environment.  Not only that but it’s stupid easy to assemble and install…and, it’s freaking POWERFUL!  When I tested it with a chopstick (please don’t use your fingers) it scared the bejeebus out of me…and bent the chopstick!

A recipe in the making...

{love+cupcakes} Blog
Cooking in the Archives

You can make these cocktails. Start right now.

Where secrets are kept, problems are solved, hearts are fixed and family is made.